INTRO
This AAR (After Action Report) covers BTHC’s (Black Hat Training Corps) inaugural “Advanced Precision Rifle Course,” held on 22-23 August 2014 at the Mifflin range in Lewistown PA. My buddy Trebark and I took this class and the following reports on my thoughts.

Most shooters have limited time and dollar budgets, forcing them to address the question “how do I spend my resources to get better?” Unfortunately, I think, many guys get stuck in the “gear chasing mode” – that is, spending a large amount of time and dollars acquiring high priced gear, often over and over. Other guys follow the quixotic quest for the “perfect 100 yd load” (“it must do 0.25moa w/ single digit ES or I will never shot it”).

The following text suggests that a professionally taught training class should be high up on the budget, in front of most pieces of gear and load development efforts. Why? I’m convinced that professional instruction is the quickest, cheapest and ultimately the best route to improving hit percentage while reducing engagement time. No set of gear or perfect load gets you further on this route: guys who suck will still suck with $10,000 rigs; while trained marksman can pound steel at 1000 with a factory 308.

Proof that training pays off is illustrated by the class’s results on BTHC’s “final exam,” a modified version of the USMC Scout Sniper UKD (UnKnown Distance) qualifying exam. Read on to learn about that success.

BHTC BACKGROUND – BLACK HAT TRAINING CORPS | The Finest in Long Range and Tactical Rifle Training
BHTC is led by Freddy Wissing, a retired NJ police officer. In addition to running the training classes, Freddy directs and competes in matches, probably hundreds in the past several years. He is assisted by Mike Erb and Chris Jepson, both experience instructors and competitors. This cadre has been teaching a basic class for nearly a decade. The 22-23 August class was the first advanced class they have offered.

STUDENT BACKGROUND/GEAR
Freddy pre-qualified all students prior to registration to insure the class was full of “non-beginners”; BHTC has a basic class that is the right spot for beginners. As such, the group was a talented bunch. Everyone came with a zeroed rifle and knew their come-ups. A number were repeat customers, a good sign that BHTC is doing something right. Most students are competition shooters looking to improve their scores. Freddy polled the group prior to the class for training requests and we requested a focus on positional shooting.

I informally put together a list of the group’s cartridges and we had approximately 50% shooting 308s and the other 50% with non-mag 6.5mm of some type. Nearly all the scopes were mid- to high-end: Vortex, Nightforce, Leupold, Premier, Schmidt and Bender. Several students had AR-10s. AI stocks and rifles were popular. Clearly, there was a lot of invested dollars out on the firing line.

We started the class with 14 and ended it with 12, so the student to staff ratio was around 4:1.

VENUE – Welcome to Mifflin County Sportsmens Club. Lewistown, PA.
Mifflin is a great spot in central PA, near Lewistown. Range is big (1050yds) and club house is full of modern conveniences (soft drinks, A/C, full kitchen). Price of lodging and food there is cheap but value is high.

CLASS-ROOM INSTRUCTION – MORNING DAY 1
Freddy started the class with a PowerPoint presentation packed with “Red Meat”, i.e. information that actually helps you get more hits. Broadly, he sub-divides “Red Meat” into 1/3 science, 1/3 art, and 1/3 skill. Different folks are stronger and weaker in these areas. Don’t know the ballistics of your ammunition or the impact of rifle cant? You are weak in science. Can’t figure out how to get a stable position on a wet roof top or how to approach a chaotic match stage? Art needs attention. Can’t shoot consistent groups or find your natural point of aim? You need work on skill. All three can be improved through training, although art clearly takes the most time. Freddy offered lots of simple concepts that helped students in all the “Red Meat” parts. As a guy strong in science and weak in art, I got a lot out of Freddy’s ideas to reduce “tunnel vision” and mentally improve control over the trigger. I took notes and asked a lot of art-related questions. Others weaker in the science asked ballistic and milling questions. We ended the class-room instruction with Freddy, Mike and Chris evaluating our rifle fit and positions. As we broke for lunch, everyone had learned some “Red Meat” specific to their situation.

LIVE FIRE – AFTERNOON DAY 1
Once on the range, Freddy immediately had us mill a target for the CBS (Cold Bore Shot) engagement. I have spreadsheet that removes math from milling; it is an improved mil-dot master – I just find the mil reading and reference it with the target size. I solved for a 660yd target and was encouraged with a center hit on the UKD target – good start! However, this was the last supported prone shot for the afternoon. Freddy had us in all of the NRA positions – sitting, kneeling, standing and unsupported prone (see attached photo of a student illustrating a solid kneeling position). Next, we worked on SBU prone (google the term for more info). As mentioned, I am strong in science and know the impact of 90 degree cant, so I found SBU rewardingly easy – Trebark and I had multiple first round hits at over 500yds. We also did tripods, one of the positions that requires skill.

Next: barricade, post and roof top simulators. I’m not giving away the secret sauce on the post, but Freddy’s technique is very stable. We were shooting nearly as good from the post as we were from supported prone. It almost was not fair. Just that one bit of skill was worth the price of the class. We learned about the barricade and roof top. Most importantly: learning the art of evaluating support options. Prior, I was just going up to the barricade and shooting my rifle where it lay. There was one hole particularly tough that Freddy made two slight changes on my rifle that had me consistently hammering targets. This is “Red Meat” art and skill applied in the field.

Freddy also had a “match stage” drill for us. Here, we engaged a plate at 757yds from a heavily wooded position using a tree trunk as support. Shooter had to hit target 3 times. It took me 4 shots to get those hits. See me in the attached picture, engaging this target – note I’m shooting lefty, due to the facts that I can shoot equally well with either eyes/hands (“Red Meat” skill) and the lay of the ground favored a lefty shooter (“Red Meat” art). 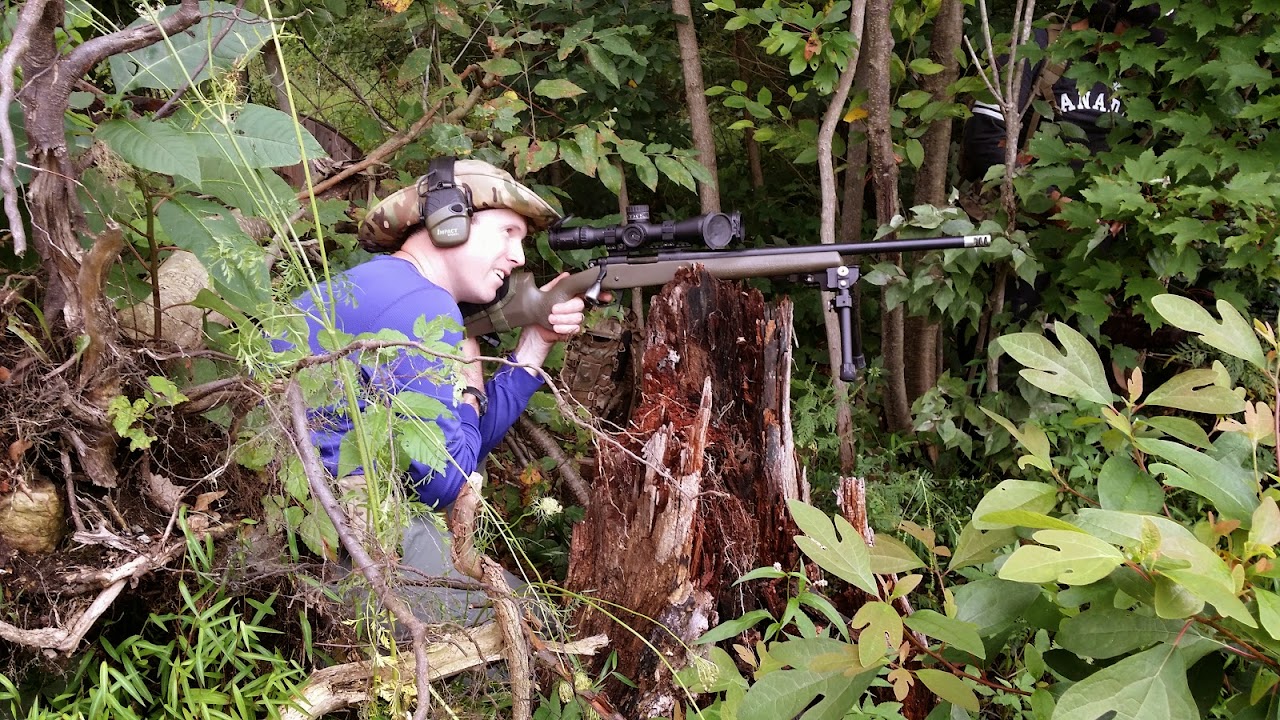 We wrapped up the afternoon at 1730. I fired ~50 rounds with ~35 hits, with most misses from kneeling and standing.

LIVE FIRE INSTRUCTION – NIGHT DAY 1
The point of training is to challenge your abilities in new ways. Wow, the night fire certainly did that! BHTC has several methods of illuminating targets in full darkness. Most students in the class had never done anything like this. Using the ranges we solved for earlier in the day, we engaged 6 targets from ~300 to ~700 yds from supported prone. As a group, we scored many hits, most of them on the first round. The value of an illuminated reticle was apparent – without one, enaging targets was possible, but difficult and it reduced the shooter’s overall situational awareness. Kudos to my buddy Trebark who, without an illuminated reticle, was still able to hit 5 of the 6 targets (the one missed was due to a mix-up on target identification, not the darkness).

LIVE FIRE – MORNING DAY 2
After a breakfast at the club and a brief classroom review, we were back on the range for a prone supported CBS, this one was a KD (Known Distance) target at 757 yds. This drill went something like this: bang, “impact!”, right down the line. This group can drive rifles at KD!

The next challenge was a combination of “Red Meat” skill and science: use the flat part of the bullet’s trajectory to repeatedly engage targets at different ranges within the bullet’s “danger zone.” With the help of the reticle, we were able hold up or down to score hits on targets outside of the trajectory’s “danger zone.” This involves some math and Freddy explained the concept well to the folks weaker on the science. Given the speed of this drill, this training was fun and real world useful.

We finished up the morning with more practice on all the positional shooting introduced in Day 1. The practice was aimed at preparing the class for the “final exam,” a modified version of the USMC Scout Sniper UKD Qualification Exam.

”MODIFIED” USMC UKD QUALIFICATION TEST – AFTERNOON DAY 2
First, background on the USMC Scout Sniper UKD Exam: Marines training to be Scout Snipers have to pass a marksmanship test where 10 ‘military E type’ silhouette targets are engaged from prone supported at unknown distances between 300 and 800 yards. The E target is 40” tall and 20” wide. 2 shots per target with 10 points for 1st round hit, 8 points for 2nd round hit. 80(out of 100 possible points) is a passing score. BHTC has modified this test by considerably reducing the target size. BHTC’s targets have nearly 50% less total target surface area to hit than the Marines. To make it even tougher, Freddy made us shoot these targets mostly from positions other than supported prone. In sum, we had smaller targets and less stability, a.k.a. damn tough final exam!

We milled the targets for their ranges and BHTC allowed us to work as a group on which position we wanted to engage each target from. We had to use each of the following positions just once:

This Exam tested “Red Meat” art (could we effectively assign the tougher targets to the easier positions?), science (milling formulas, ballistics) and skill (10 different positions). We split into 3 groups and got shooting!

On the third round fired, my rifle went down with a case head separation that left half of the brass cartridge in the chamber. F*CK I’m out! However, I turned this into a positive: on returning home, I called my gunsmith, Jeff Walker, and he walked me thru an effective and safe removal process… so another “Red Meat” skill learned from the class. Many thanks to the many students in the class that offered their backup rifles to me – I really appreciated the generous offers of help.

The rest of the class continue to shoot and absolutely smoked the exam. Here are the stats: 11 out of 11 students had passing scores about 56 (11/12 if you count me w/ my mechanical malfunction as a fail). 72.6 was the average score and the top score was 88 (nice shooting Ken – that resonator thing on your barrel apparently works!).

Considering my intro statement about the value of professionally instructed training in light of these exam result, the evidence is clear. Could some of the students pass the exam prior to the class? Yes, absolutely. But 11 out of 11? No way and certainly not with an average score of 72.6. Spend the dollars and time and TAKE A CLASS!

Here is the class, BHTC cadre and our weapons: 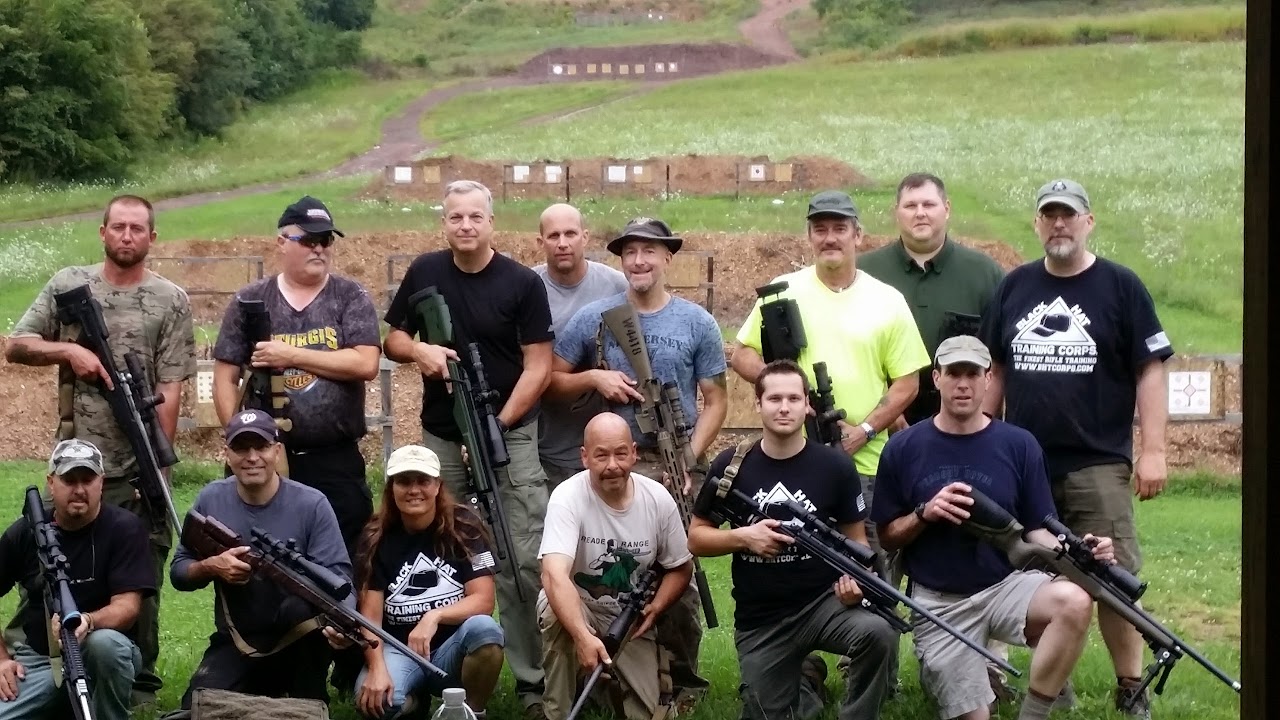 Here is the fun conclusion to the class: